You can now preview our show, the new “allTURNatives” exhibit of ITE work, as photographed by John Carlano. The Wood Turning Center will have its own virtual exhibit on its site in the near future, which will include some installation shots and other material not available to me, so keep checking there.

Some caveats apply here: Only for my objects are titles provided (viewable if you allow the Active X controls or when you hover your cursor over the large image), and only my sequence is chronological. The sequences of images for other folks’ work are not chronological and may not even be logical; this can be blamed on the order in which the objects were photographed and the way the files were named. Some objects have multiple photos; in particular, John shot rapid sequences of Siegfried’s kinetic work in motion to try to capture their movement. Be sure to scroll through all of the thumbnails at the left of the screen to see all of the images. Here are links to the web pages, by artist:

If you can, please come see the work in person at the Wood Turning Center. Join us there on Friday night at 5:30 for our official opening or on Saturday afternoon, 2–4, for a gallery talk with all of us.

Lesya came in not to dance but to carve waves for Siegfried’s collaborative wave piece. Sadly, there were misunderstandings early on in the communication process for this collaboration, and Sean and Jean-François won’t be working on it. Happily, Peter did and Lesya is and I will and Elisabeth may. And in the end, the public also will, as the piece will be installed as an interactive work, with anyone free to arrange the wave forms as they like. 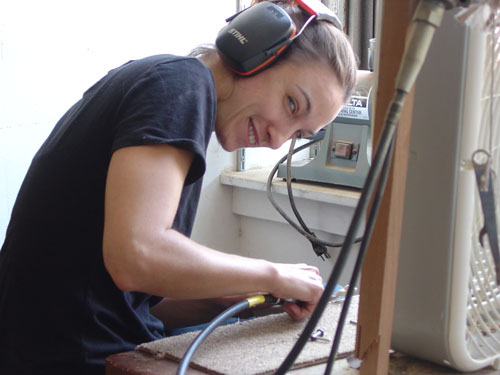 Siegfried continued carving his box elder vessel. He later found that mounting it on the lathe to carve let him see and control better what he was doing. 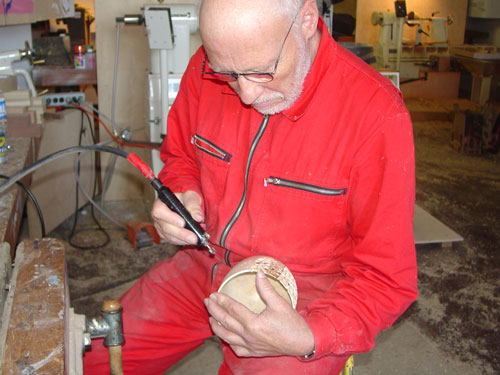 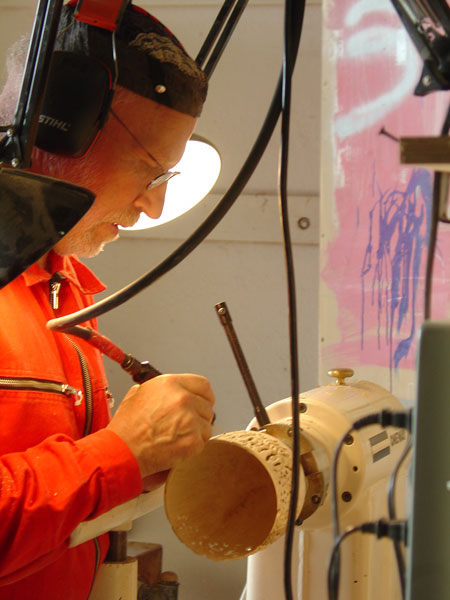 Sean worked on new and old pieces. The black in this one is not painted but ebony. 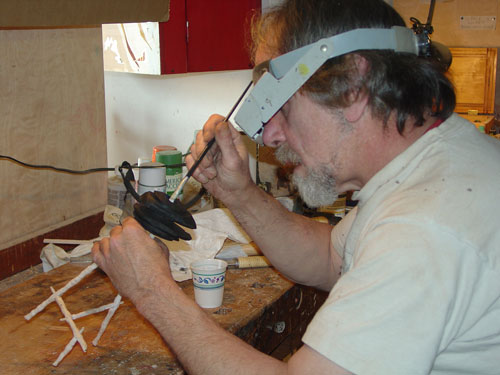 Jean-François and I began our collaboration, based on an idea I used in a previous work, of breaking and repairing vessels visibly. Here are the vessels we started with. Jean-François turned the Chinese elm and osage orange bowls; I turned the sycamore bowl (the smallest). 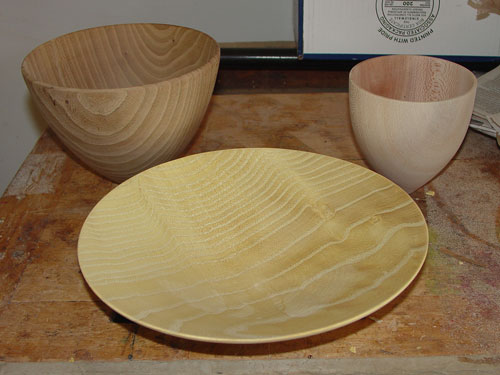 Breaking the piece takes a bit of will. We broke the sycamore bowl into just three pieces. 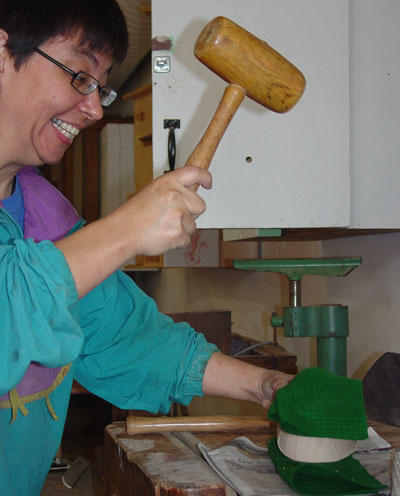 Jean-François hit the Chinese elm bowl squarely and got a complicated break, which made gluing it—using 5-minute epoxy with a working time of maybe 2 minutes—a real challenge. Adding acrylic paint to the epoxy for color decreases (maybe even halves) the working time, so I use 30-minute epoxy at home. The 5-minute version is what we had on hand here, though. (For anyone who wants to know more about coloring epoxy, I discuss the subject in an article called “Nulling Voids: Filling Cracks and Holes in Wood” that, along with other articles, is available on my website under “Other links.”) 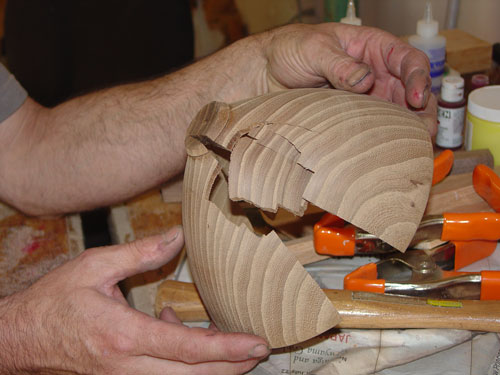 We used red for the sycamore and black for the Chinese elm. I mixed the red from acrylic paints; the black we achieved by mixing in charcoal from burnt wood (which Jean-François happened to have in jar).

I like the way the interior of the sycamore bowl came out; the exterior needs some touchup, though. 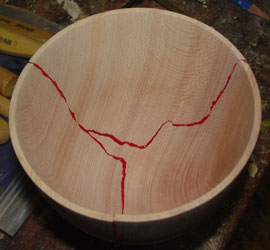 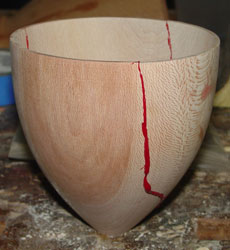 This technique—this trope, really—is deeply meaningful for me (you can read a note about the backstory on this here, under “About the work”), and it is one I intend to explore in a series of works after I return home. Using it in this collaboration is a little odd for me—like choosing a subject like, say, “death” or “incest” for a poetic exercise—and I find myself holding back emotionally, treating the process as more of a technical exercise than an act of artmaking. I would like to talk with Jean-François about how he feels about this process—indeed, how he feels about artmaking in general. I have wanted to from the beginning—the chance to explore the subject with other artists is one reason I applied for the residency—but before now, I have felt stymied by the language barrier—even though Siegfried and I managed a deep conversation about it driving home from D.C. This now is an opportunity to explore the subject.

For me, turning is deeply emotional, not just an application of technique, and it is an act in which meaning is both intentional and discovered. For me, the aspect of meaning—not technical sophistication—is what makes turning an art and not just a craft. I can argue with myself about this, of course—is not craft about creating beauty and is not creating beauty meaning enough? Yes, yes—but I’ll put this statement out in hopes of eliciting conversation about it. Turners who regard yourselves as artists (any artists, really), what do you say? Have your objects meaning? Is the meaning intentional? Do you start with wanting to express something, or does the expression emerge through the work? How do you create? Have you something to say? Must an artist have something to say? Is it enough to create objects in which others find their own meaning? Is beauty enough? Do any of you care, or do you care only about the making?

I really must sleep now. Let me hear from you, readers.

Peter and Elisabeth left us yesterday.

Here’s a look at some of the breakthrough work Peter has done during the ITE. First the wearable line (and a couple of wall pieces). Judging from the response to these pieces, Peter will be able to sell all he chooses to make. If you want one, you had better make it to the preview show August 3. 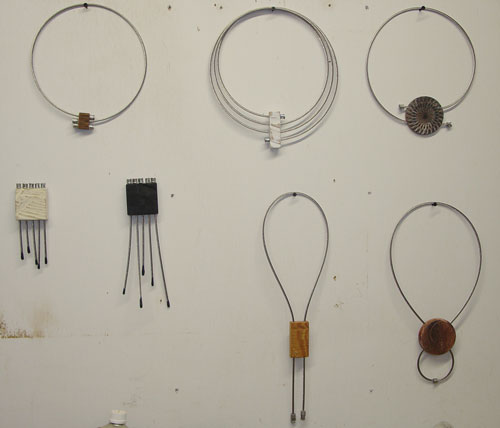 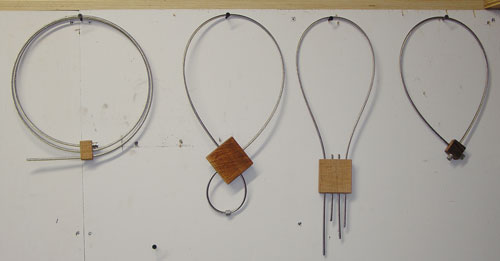 Cast cement water bottles. What was he trying to say by leaving them capless? (In truth, these are pretty cool. The cement actually feels like plastic.) 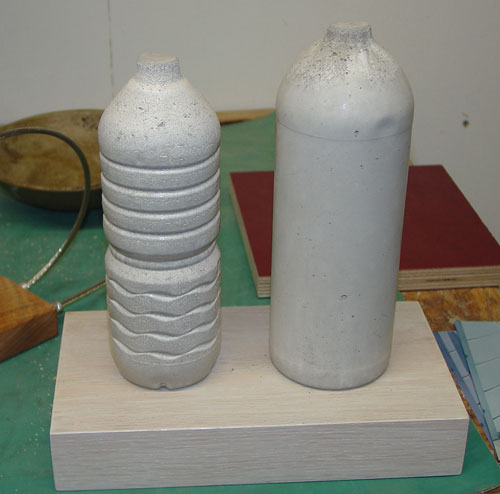 You’ve seen this piece in the blog before, but I think he decided to make it horizontal instead. Again, these are forms Peter has used to cast pieces for his furniture. The concrete darkens the form wherever it contacts it.

Peter had time for a last lunch with Siegfried and me before he managed to get packed up and on the road.

Elisabeth, on the other hand, just came in to say goodbye and sign her bowl, her first turned work, a mortar made of pear. 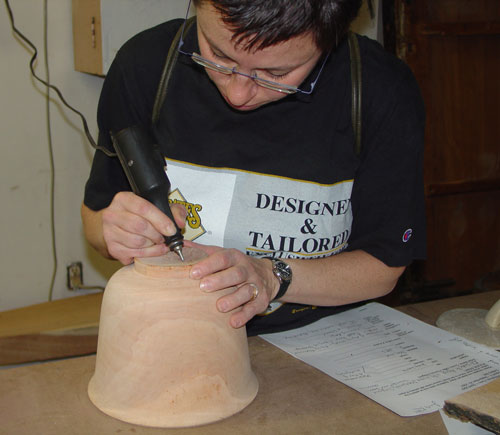 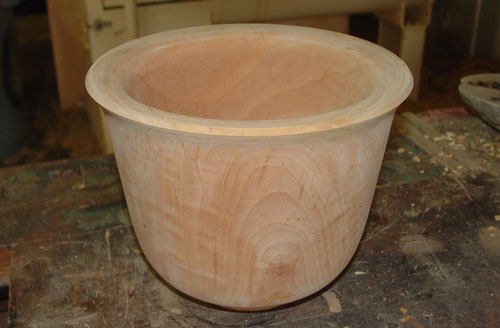 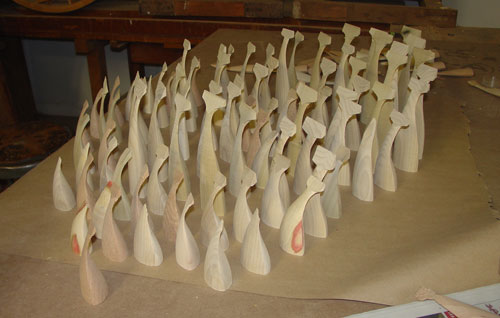 And saddest of all . . . Hilary’s cookies are all gone. 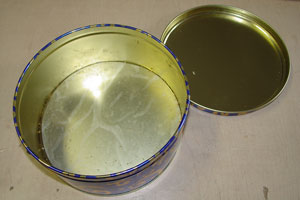 Thank you, Hilary, for hearing—and answering—our silent prayer in our hour of need.