Siegfried was absent from the shop this morning, and we soon learned from a phone call that he was at the hospital undergoing tests. He has not been feeling well the past few days, and he noticed that his heart was racing and wouldn’t slow down. (His pulse, which is normally around 60, was stuck at around 100–110 beats per minute.) The hospital did not find a reason for his racing heart, but they gave him something to slow it down. He came back from the hospital, but did not stay at the shop. We hope he will be back turning with us tomorrow. In the meantime, here are some of the shapes he turned yesterday using the inside-out technique. He is thinking of doing more and assembling them into a piece. 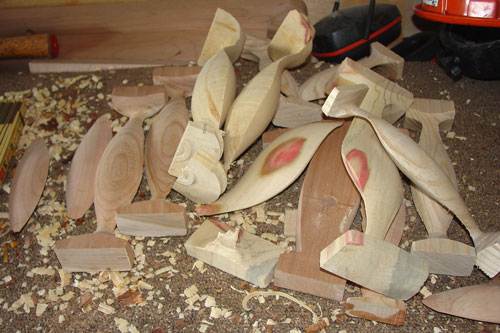 Sean, the inveterate recycler, has taken two of the largest fragments of my broken mulberry bowl (see the post “Monday, June 18” if you don’t remember what I’m referring to) and turned them to create a new piece. Below, you see two views of the larger fragment on the lathe. Sean kept shifting the center—four or five times in all, I think—to make different cuts. 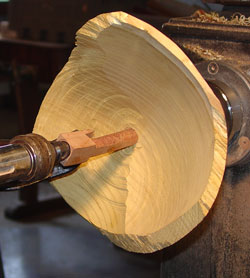 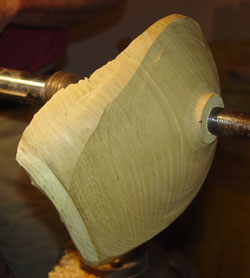 After turning the two fragments using multiple centers, he screwed them together temporarily to check their fit and balance. He liked what he saw once he aligned the grain in the two fragments, so he glued them up and clamped them in the lathe. He will carve them next. 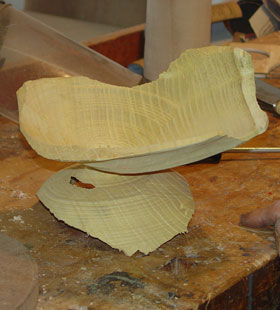 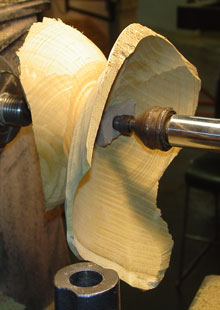 Remember the sculpture I called “the mascot”? It is done, except perhaps for another coat of finish. Here it is in a cupboard with Sean’s third oak bowl. This one has a dyed green interior.

In the righthand photo below is the beginning of a new freeform sculpture. Sean has much carving to do on it, but you can see the grooves and shapes made already by turning the scraps. He sees in it a running man, but the name has been used too many times already, so he will come up with another title. 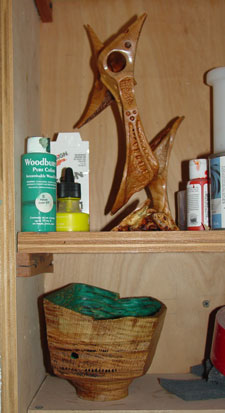 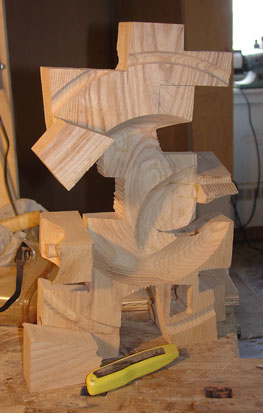 This is the current state of two of the oak ring pieces still to be assembled into a sculpture. In the background to the right, you can see Sean’s fourth oak bowl, the last of the series. 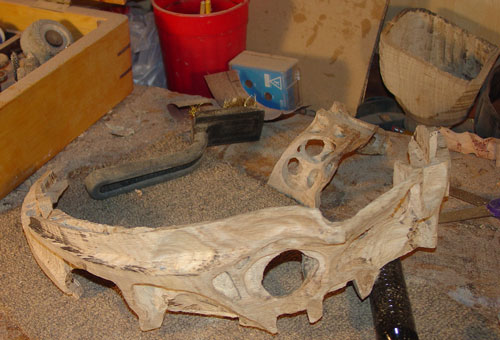 Jean-François turned a new oak bowl. Having completed the turning (except for the foot), he is cutting grooves into the exterior using an Arbortech reciprocating carver, following lines that he drew freehand. You can see that he has already colored the interior using his favorite vinegar-and-steel-wool technique. 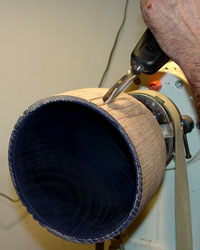 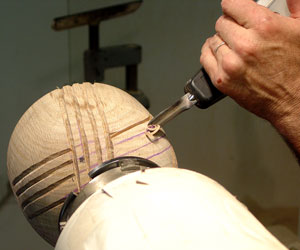 Albert LeCoff came by the shop this morning with Phil Hauser, treasurer of the Wood Turning Center and himself a turner and a collector. Here, he admires the bowl Sean turned of a walnut scrap. 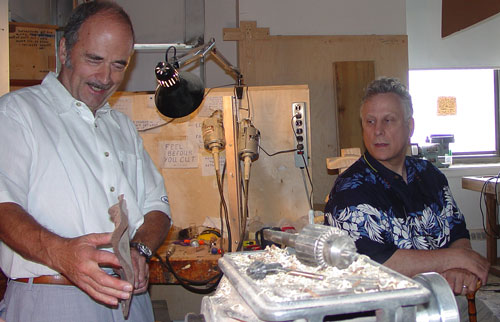 Besides following up on group plans with phone calls and email, I finally got to turn some today. I turned most of a hollow vessel of wet pear (which is lovely to turn). I plan to finish turning it tomorrow and to carve the mouth. Maybe I’ll get a photo tomorrow.

It is pouring rain outside as I wrap up this post. Tomorrow, we can expect thunderstorms, a treat for an Arizonan.