This may be my last blog post for a few days. Jean-François, Siegfried, and I leave for Washington, D.C., tomorrow and will be gone through Sunday. We will be visiting with several collectors of wood art: the Kochmans, the Breslers (who are generously putting us up for two nights), and the Masons, and also visiting the Smithsonian’s Renwick Gallery. Sean will be staying behind, because he cannot bear to be away from the shop for two and a half days. I will post as I can but have no idea what to expect in the way of connectivity—or free time.

I spent all morning working on the blog and following up on our ITE travel plans. Here is what I found when I made it into the shop. 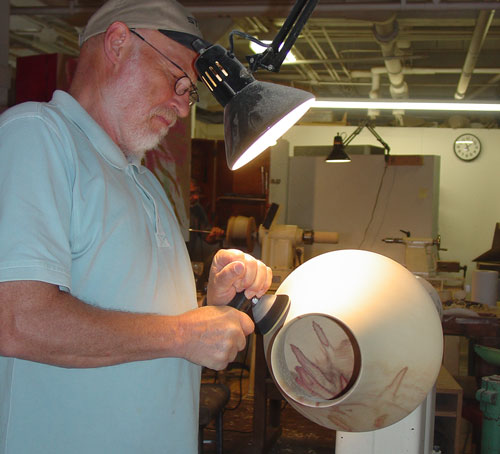 Sean was carving the vessel from yesterday. Curiously, he has decided that the foot is in the wrong place, so he cut it off and is gluing it in a different spot. He has it clamped between centers, because there are no clamps here small enough. He has carved a cover for the drive center so that it won’t damage the bowl. In the lefthand photo, you can see both his carving of the bowl and the stump of the original foot. 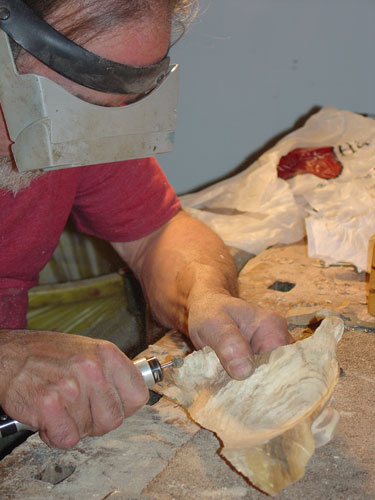 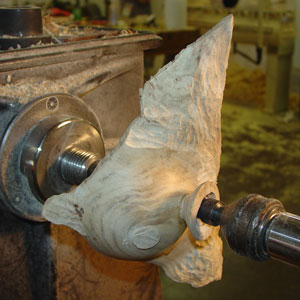 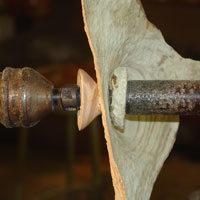 Jean-François was working on a idea he has wanted to explore for a long time. He mounted a chainsawn chunk on a makeshift faceplate on the lathe and hollowed a bowl without turning any of the exterior. He then used the bandsaw to roughly shape the exterior, reverse mounted the vessel on a jam chuck, and proceeded to shape it further using an Arbortech with the lathe off. 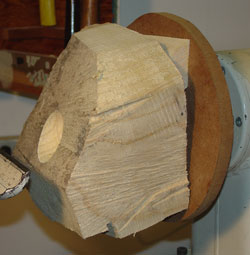 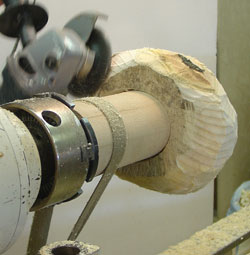 Note the strap in the righthand photo above. This is a loop that runs down to Jean-François’s foot. His foot pressure on the strap keeps the piece from rotating under the tool. When he wants it to move a little, he lifts his foot.

Here is the bowl in an interim state. After shaping it further, Jean-François decided to burn the surface. 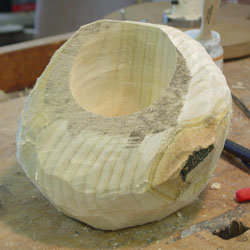 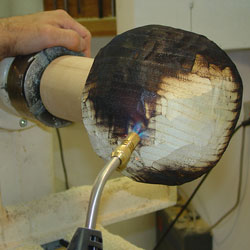 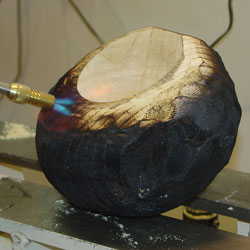 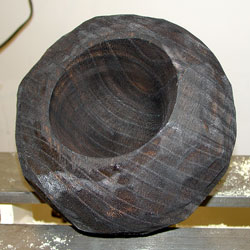 The color of the scorching seemed to go more brown than black as it cooled. Jean-François will no doubt do more to this bowl before he is done with it.

Work stopped for a while for our first weekly meeting with Albert and Tina. We set up an impromptu table in the shop, and Siegfried ordered pizza. As a starting point for discussion, Albert had us each choose one item from someone else’s bench, and then we started talking.

Siegfried chose my first Cryptomeria bowl, because he is interested in talking with me about Japanese influences in my work and what have been described as Japanese attributes of his work. I chose Jean-François’s face grain ailanthus bowl, because I am intrigued by the spontaneity with which he works. Jean-François chose Sean’s unturned bowl, because he is interested in the idea of making vessels through means other than turning. Sean chose Siegfried’s silver maple vessel, because he likes its simplicity and the way the grain works with and against the shape. Tina chose a dozuki saw from Jean-François’s bench, because she wanted to know how he used it in his pieces (he cuts off the stub left when using a spur drive). Tina or Albert chose the ball peen hammer from Sean’s bench, also curious about how it was used (to hammer in small nails). And Albert chose my favorite object of all. (Wait for it. Scroll down.) 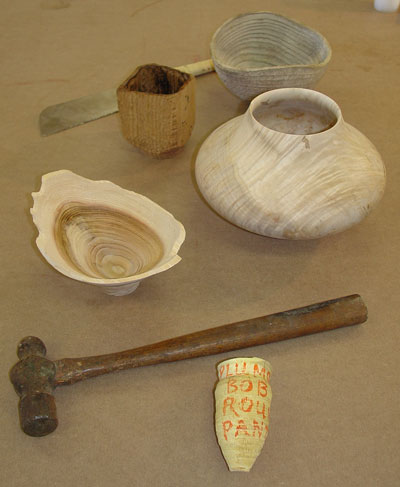 The odd yellow thing at the bottom of the last photo is what Albert chose. I’d have been curious about it too, if I had seen it. It’s a yellow chunk of mulberry with writing on it. As a point of fact, the chunk came out of the large mulberry bowl I turned that didn’t make it (R.I.P.); it was the center core that I left in so that I could use the tail center for stability; I cut it out once I had removed the bulk of the mass from the bowl’s interior, and I put it in Sean’s scrap box. What makes the chunk a real curiosity is the writing. Sean found it among his scraps and thought it looked like a plumb bob. Naturally enough, he wrote on it, “Plumb Bob Round Pants.”

I could hardly stop laughing.

Am I the only woodturner out there who knows most of the words to the Sponge Bob Square Pants theme song? I don’t think so.