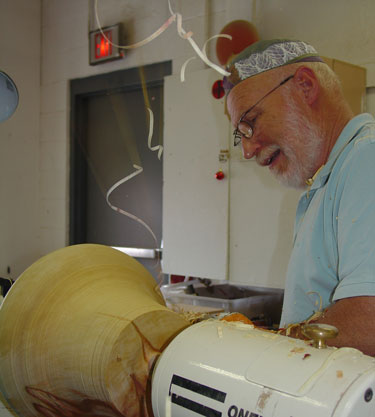 Today, Siegfried began a larger vessel of the same shape as the silver maple vessel, this one of box elder. He was shooting ribbons to the ceiling turning the very wet wood.

When he began deep hollowing of the vessel, he tried out the hollowing tool with the Stewart armbrace and Jean-François’s attachment. He says he enjoyed the experience, though he found himself switching back and forth between the tool and a heavy gouge. Yesterday, he tried out my Exocet tool. He regards trying new tools as one more of the opportunities afforded us by the ITE. So do I. 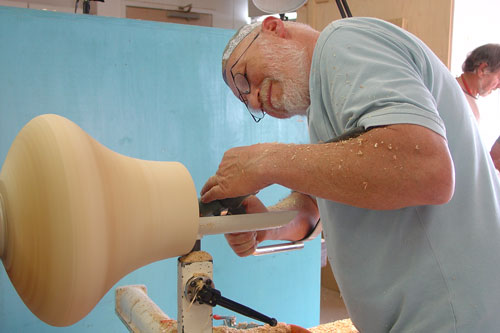 Sean gets tired of working on long, complicated projects, so today he decided to make a “fast” bowl from a cutoff. Here, he is already carving the foot. The photos below show the finished piece. Yes, the color is artificial. 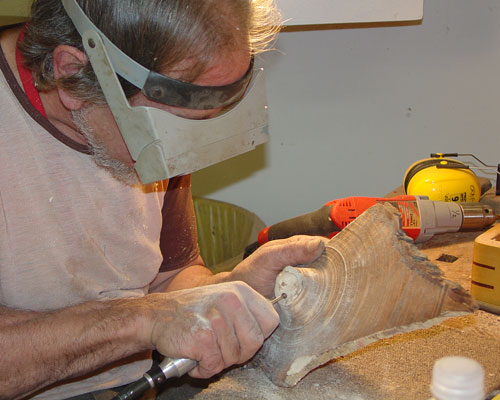 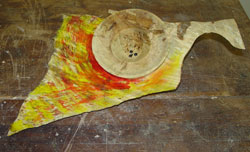 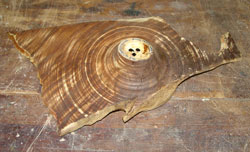 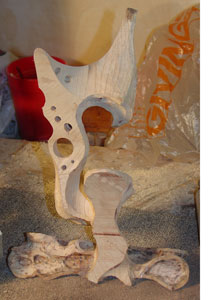 I have begun thinking of Sean’s sculpture as our mascot. Here it is in its latest form.

Jean-François has finished his three ailanthus bowls. Here they are. He cannot quite hide the break in the first bowl, so he doesn’t yet know what to do with it.

Jean-François and Sean are collaborating on the oak sculpture for which Sean turned the pieces. Both are carving and texturing the pieces that will be joined for the final work. Here, Jean-François is using a Foredom to work (or not) on the disc that will be the base of the sculpture. 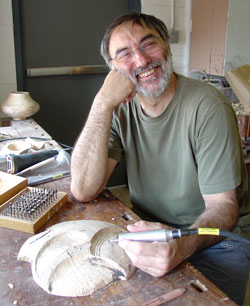 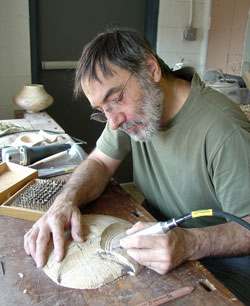 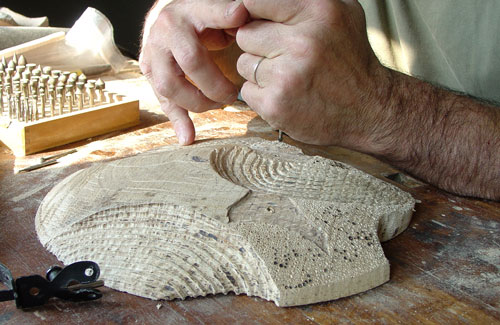 My large mulberry bowl exploded today. I had just turned up the speed, looked at the dial and thought, “That’s probably too fast,” and it blew up on me. The glue joint at the waste block gave way. Fortunately, no one was hurt. Sean took the largest pieces to use in one of his freeform sculptures. No, no photos of the explosion or its aftermath.

After picking up the pieces, I picked up a log of Cryptomeria japonica instead. Now, as it happens (thanks to Gus and the cosmos), I’ve gotten wood from three important species of Japanese trees here: this one, paulownia (kiri), and Japanese cypress (hinoki). This is also known as Japanese cedar, sugi in Japanese, and it is the national tree of Japan. Its earlywood and latewood differ greatly in density, so it is a perfect wood on which to use Jean-François’s texturing technique. Look at the texture I achieved using a wire brush in a drill. I applied the brush both with the piece turning and turning it manually. Jean-François showed me the trick of reversing the drill as needed to brush with the grain; for all you novices to this technique like me, this greatly reduces the fuzz inevitably raised by brushing. 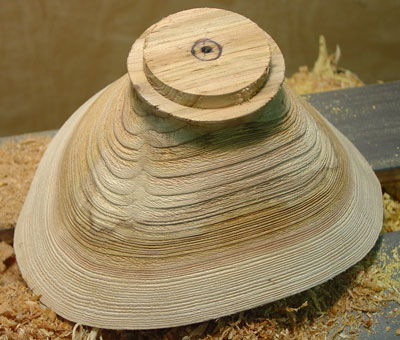