Jean-François made an attachment for the hollowing tool to resist the torque from the curved tip, making the tool easier to control. Jean-François says he learned this trick from Alain Mailland. He later painted the handle black. 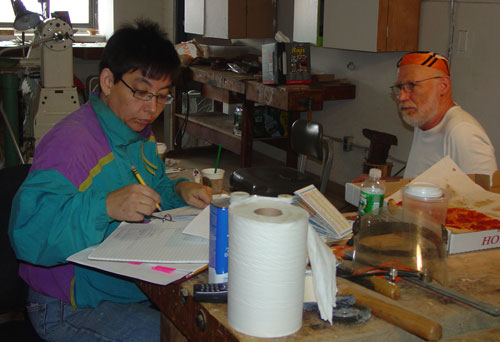 We took a break at lunch to plan our travel schedule. Siegfried bought pizza from Paolo’s to ease the process. It took a couple of hours of phone calls and emails, and we’re still trying to finalize plans. Among other places, we will be visiting Washington, D.C.; Wilmington, Delaware; and various spots in Pennsylvania. I’m hoping we can squeeze in a trip to NYC before the end too. 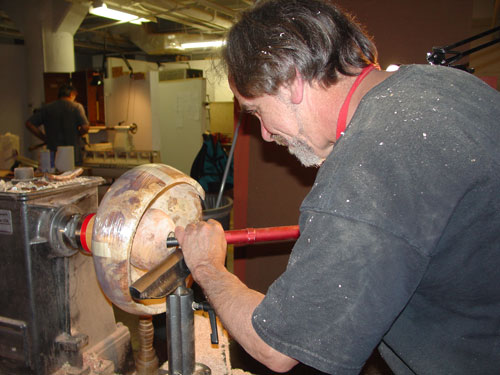 Sean continued to work on the burl vessel. Note the inner spherical vessel he is hollowing inside the larger bowl. He has wrapped the entire outer bowl with shrink wrap to keep it from coming apart as he turns.

Jean-François was still trying to get to turning a bowl. First, though, he had to turn a handle for his bowl gouge. By the end of the day, he had at least mounted and rounded a chunk of ailanthus for a real piece. 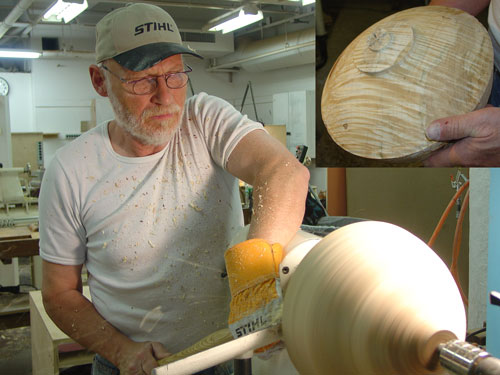 After tinkering most of the day with the vacuum chuck, the electric chainsaw, and the bandsaw, Siegfried prepped and started turning a glorious chunk of silver maple burl. Check out the inset. Siegfried usually works with less figured wood; he thinks that whatever vessel he turns from this, the wood itself will be the most beautiful aspect. 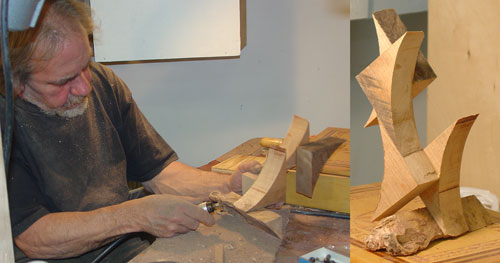 Sean took a break from turning to carve. He has assembled the framework of what will be a freeform sculpture from various scraps lying around the shop. Woodturners will recognize the corners removed on a bandsaw for turning.