After being glued to the computer for 10 days or so, I have finally finished updating my work-for-sale pages. “Finished” is, of course, a relative term. There are about a dozen pieces I need to rephotograph before I can post them, but for now, I’m declaring I’m caught up, so today I get to go back into the studio!

I have so many pieces I want to make. Forcing myself to sit at home and work on my web site has required discipline. These tasks are not the ones you imagine when you think about being an artist. But if you don’t do them, you have to find another way to pay for your artmaking—or at least for your food and shelter.

I will blog more later. Now I’m off to make stuff!

I had no idea it had been so long since I last posted. I was busy preparing for and then enduring the Tubac Festival of the Arts. It was five long days (two days longer than justified by the traffic it attracts, I think), and now that it’s over, I am focusing on updating my web site, specifically the work-for-sale pages, which have been down since before the ITE last summer.

I hadn’t photographed any of my work since the ITE, so I spent two solid days before the Tubac show photographing everything I had on hand. Regrettably, I neglected to photograph the new work that I have sold over the last six months. Now I have about 750 photos of remaining new work to tweak, crop, and load into web pages. (The large number is because I take multiple views of each piece, both for documentation purposes and so that online customers can really see each piece.) This includes my remaining ITE pieces, which heretofore had been photographed only by John Carlano—and only one view of each, at that.

Here are two views of a reconceived “In Her Dream.” This is the piece originally (in the Wood Turning Center’s “alTURNatives” exhibition) displayed suspended in a Japanese maple branch. There was no way to transport that very fragile branch back here after the exhibition, so I had to redream the context of the piece. I love what evolved. I started by displaying the vessel on the stones, then added the carved, dyed sassafras base just before Tubac. 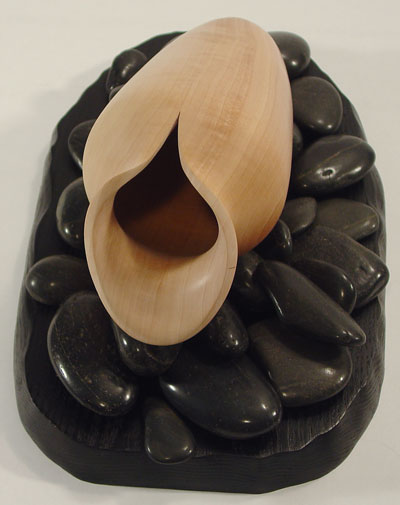 I think of this second image as a boudoir shot of the piece. It makes me smile. 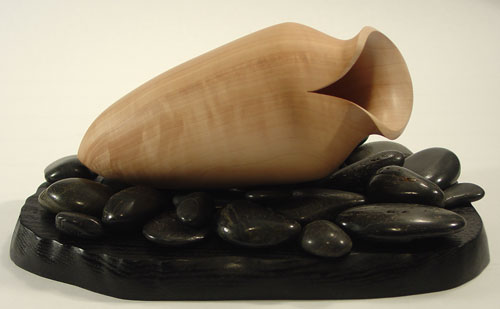 I’ve given myself until the 24th to finish updating my site, because I will be out of town next week.

Now that I’m almost caught up, I’m going to try to set aside a regular time to photograph work. Posting photos here will be an incentive. So will not having to face this mountain of work all at once.

This post has to be brief, because I have too many things to do, but I did want to update you all on some of what I’ve been up to.

I took the plunge a couple of weeks ago and registered for the smARTist Telesummit, an event that gathers 13 experts covering various aspects of making a living as an artist. The presentations are done over the phone and recorded—some 15 hours’ worth. The timing was bad for me, as I have been busy preparing for my upcoming show and coping with a major change in my family, so I was not able to listen live, but the recordings, which are available online, make it possible for me to let it all unfold at my own pace. Thus, though the event is technically over—that is, all the speakers have spoken—I am still engaged in it.

I have to say I have been impressed with the abundance of information provided and the range of topics covered. I will go into more detail as I soak it all in.

I’m sorry I didn’t share this ahead of the event, but registering was a last-minute decision for me, and I did not want to seem to endorse something before I had checked it out. Do check it out now, though, if you’re interested; I suspect the recordings and handouts may be made available at a later date.

I have a major show coming up in just a bit over three weeks, so I’m trying to get in gear and get productive. This is just one of the business aspects of trying to make a living as an artist. It requires a different mindset than simply creating what is in my heart. Unlike many woodturners, I don’t have a production line, which means I don’t make the same item or type of item over and over. I do have to consider the marketplace, however, and make sure that when I do a show, I have available a wide range of vessels, in terms of price, size, shape, style, etc.—mostly so that I can offer customers choices, but also because variety makes for a more-inviting display.

Variety also, of course, keeps the creative process fresh for me. Even when I am focused on producing a lot of work efficiently, I still want every vessel to be uniquely itself. I want the process to remain one of creation, not one of mass production.

The upcoming show also means that I need to put off solving some equipment problems I’ve been having—chiefly with my chucks. The spindle on my old lathe was 1 inch; that on my new lathe is 1¼ inches, which meant that I had to change the insert on my old Teknatool Supernova chuck. The insert had seized, however, and in removing it, I appear to have damaged a jaw slide, as the slides no longer meet snugly at the center (and jaws don’t close properly either). The damage isn’t readily identifiable, however, and I’ve already spent one afternoon trying to pinpoint the problem. That chuck used to be perfectly centered, with perfect repeatability when I would remove and replace pieces. My new chuck, a Supernova 2, isn’t perfect, but I can’t spare the time right now to tweak it either. I’ll let you know what I figure out when I finally have time, after the show. In the meantime, I just have to make do. To quote Tim Gunn, “Make it work!”