One of the visitors to my studio posted photos on her blog. See them here. The commentary is in Japanese, so most of you won’t be able to read it, but you can see the images.

The spring Tucson Artists’ Open Studio Tour is coming up again next weekend, March 13 and 14. I will be here from 11 a.m. to 5 p.m., so please come by and see what I’ve been up to (and get first dibs!). I may even have some work in progress on the lathe, as I’m busy getting ready for the Spring Artisans’ Market at the Tucson Museum of Art at the end of March. I’m especially trying to finish some mesquite vessels with stone inlay.

You can find all the details about the tour, including a complete list of participating artists and maps of the studio locations, online at the tour’s website or in the current issue of Zócalo magazine. (This “Tucson Urban Scene Magazine” is worth hunting down; read it online or find it at various locations around town.) Fellow Flux artists Steven Derks, Peter Eisner, and Maurice Sevigny will also be opening their studios.

I am busy getting ready for my next two events. First up is the Tucson Open Studio Tour, this weekend. From 11 a.m. to 5 p.m. both Saturday and Sunday, 167 artists all over Tucson will open their studios to the public. You can download a combination calendar and map guide showing the locations of all the studios at the Tucson Pima Arts Council site or pick one up at various locations around town, such as libraries and galleries. I am taking a short stack to Flux Gallery tomorrow (actually later today), when I staff the gallery. Five of the Flux artists will be opening their studios: me, Maurice Sevigny, and, at the same shared studio, Bryan Crow, Steven Derks, and Peter Eisner.

If you want more info, the Arizona Daily Star had an article about the tour in its Sunday paper. If you forgot to get the paper or already recycled it, and you’re willing to register and login, you can read it online at azstarnet.com.

The studio tour gives you a chance to see how (or at least, where) your favorite artists work. My studio will, of course, be a lot cleaner than it usually is (although I can never entirely get rid of the sawdust), but you can see my equipment and my wood and learn about my process. You can also see my work, of course, including some in progress, especially pieces I am trying to finish before the following weekend, when . . .

. . . the Tucson Museum of Art holds its annual Holiday Artisans’ Market at the museum (140 N. Main Ave.). The show is open from 10 a.m. until 5 p.m., Friday, Saturday, and Sunday. You can find me in my usual spot, Booth 105, on the east side of the museum, catercorner from Old Town Artisans. This will be my last show of 2009, so after Thanksgiving I will finally get to finish laying the new floors in my house.

My studio is almost together, but I had to stop working on it to focus on the house itself, so that we can move in by the end of the month. It’s a satisfying but exhausting experience. Everything I do is for the long term: no throwing on paint to make a room livable; instead, it’s careful (and, yes, tedious) preparation followed by meticulous execution. Still to go is more painting and then laying floors.

Here are some photos of the initial transformation of the garage into my studio. 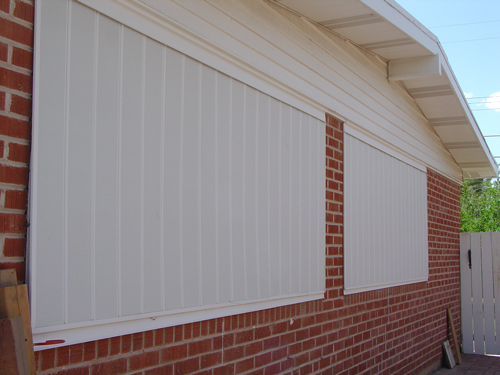 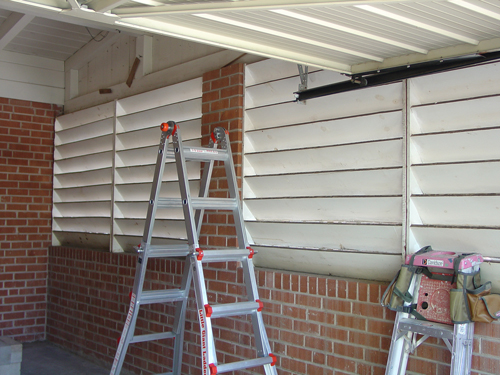 As you can see, the aluminum siding covered simple wooden louvers. I dismantled them and used the wood to frame the windows and air-conditioner and the siding on the outside, as well as for a frame for my dust collector, as you will see in later photos. Recycle! 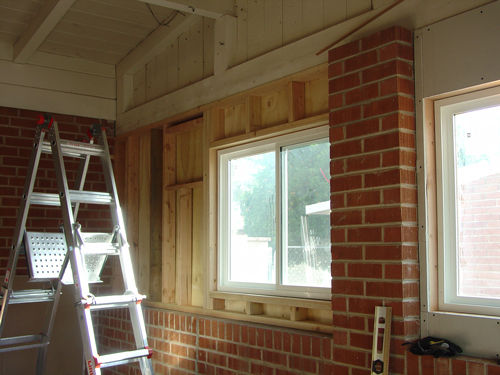 Under the tutelage of my friend Art, I learned to frame a wall, install windows, put in insulation, put up drywall, and much more. In this photo, one wall opening has been framed and drywalled; the other is in process. 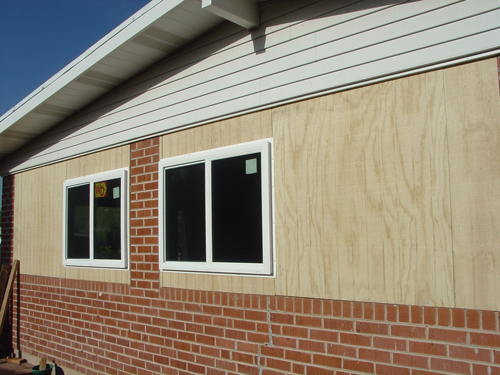 Since this photo, I’ve installed an air-conditioning unit and added trim around everything. I still haven’t finished caulking and prepping, and I still need to prime and paint, but I will get to it, I swear.

And inside, I’ve added a lot of new equipment—bandsaw, belt sander, drill press, dust collector—but haven’t yet moved over my lathes and tools. Except for a demonstration, I have not turned since the end of April. I miss it, but I am finding satisfaction in these other pursuits. It is exhausting, though, so I make no promises as to resuming regular updates to my blog.

My partner and I close on the purchase of our first house in less than a week. This means I will have my own studio for the first time! I’ve been having fun shopping for new equipment and planning my new space, which will be in the garage. The electricity in the garage is insufficient, so I am having an electrician install a new panel and a bunch of outlets. A friend of mine and I will frame one wall and install windows and a room air conditioner.

Besides working on my studio, I will also be laying new flooring in the house and repairing walls and painting and doing maintenance on the roof, so it may be a month or two before I actually return to turning full-time. In the meantime, I can still work in my current studio—whenever I’m not working on the house or packing and moving our stuff.

I will try to keep you up on the progress of my studio. I have been avoiding blogging because this has been the most stressful month I can remember in years! Besides, I’ve barely had time to turn. But very soon I’ll have something to blog about again.

An interesting week, not terribly productive in terms of finished work, but I did make progress in less direct ways.

I tried out my new McNaughton Center Saver. It wasn’t quite as straightforward as I was expecting. The biggest complaint I have is that the system comes with insufficient documentation. There isn’t even an illustration of the setup of the unit. And the instructions on how to use the Center Saver are minimal. I’m lucky: I have seen Mike Mahoney demonstrate the McNaughton system, so I had some idea of what to do, but without that experience, I would have felt pretty lost. I think Kelton should include at least a brief video of its use (on CD or DVD)—or at the very least make such a video available for free online. I know that Mahoney has published a DVD on using the Center Saver, and I trust that it’s good, since he is an expert with it, but it’s also $25. Instead, I used a helpful article by Steve Russell as a guide to using the system. (Kelton does provide a shorter version of the article on its website; I suggest you print it out to have on hand as you try out the system. The version I used came from the DVD Woodturning with Steven D. Russell, Volume I.)

I prepped two pieces of wood, one mulberry, the other eucalyptus. Both were heavily checked, and this may have caused some of the problems I had, though ultimately that didn’t appear to be the case. I started with the mulberry and the least curved of the curved blades, trying to remove the largest possible core. I cut the first couple of inches without problem, but then the blade began to catch, and catch hard, so that the lathe stopped altogether, and this with minimal forward pressure. I tried systematically adjusting as many variables as I could identify—widening the kerf, changing the angle slightly, pushing even less, making sure the blade was up against the cross brace, etc.—but the blade kept catching.

I finally switched to the eucalyptus chunk and fared better. I got much deeper without a catch, then when the blade did begin to catch, I was usually able to back off a little and resume without the lathe stopping dead—though it did stop a few times. Eventually, I was able to cut the whole core out. Woohoo! The wall thickness of the outer bowl was even fairly consistent, so I had followed the outer curve pretty closely.

I was exhausted by the effort, however. I went home early, and I was ready for bed by 7 p.m. that night, whereas (as some of you know from my posting times) I’m usually a real night owl. And I was clearly using muscles I wasn’t accustomed to using, because I had pain in my hand, my elbow, and my shoulder!

I haven’t given up on the Center Saver by any means, but I do have to set it aside for a while as I concentrate on preparing for my next show, which comes up in just a little more than four weeks. My inventory is still low from my fall shows, so I need to get in gear and get productive. In the meantime, if anyone has any suggestions on improving my Center Saver technique, please share!

Also this week, Pat and I rearranged the studio, relocating my old lathe to the opposite end of the room, in front of the garage door. I also finally installed pegboard on the divider behind my lathe, so I have my tools better organized and at hand, which will let me be more efficient. Of course, that means that the shop photos I just posted are already out of date. Ah, well.

I’m gradually getting settled with my new lathe in my still-newish studio digs, but here are some pictures, finally. 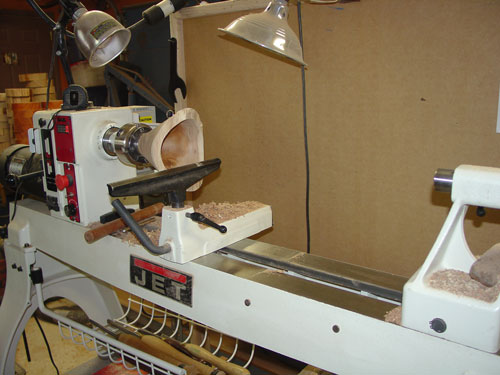 I plan to install pegboard on the divider behind my lathe for easy tool access. 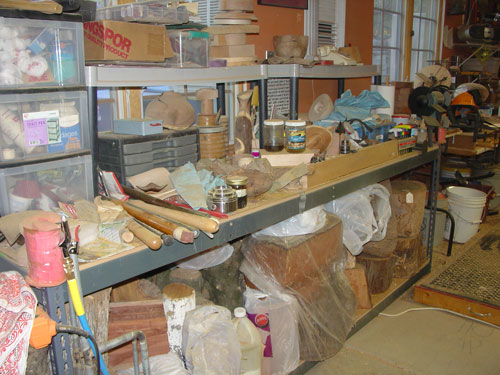 I’m still finding places for many things. In the meantime they clutter my work bench. Notice the handy space for wood storage below my bench. 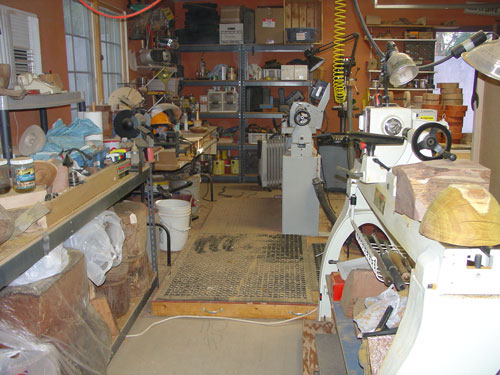 You can see the lathe (a 1.5-hp Delta) and work space of the studio’s owner and my shop mate, Pat Reddemann, in the background. 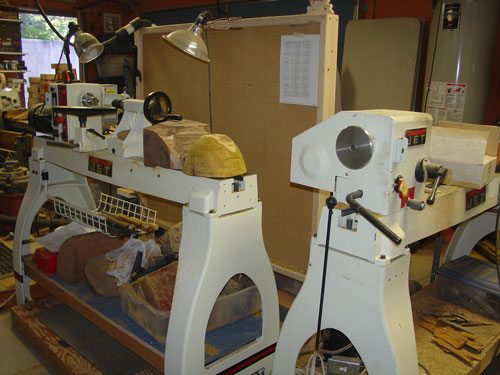 Right now, my old lathe abuts the new one. The plan is to set up my vacuum chuck on the old lathe for both Pat and I to use whenever, without having to change the setup on our primary lathes. We will probably find a new spot for my old lathe soon, so I’ll have more working room at the end of my new lathe. 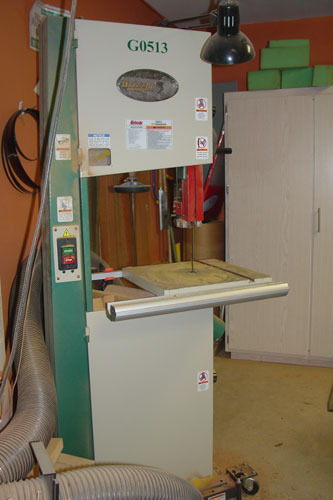 Pat got this new 18″ Grizzly bandsaw just a couple of months ago and has already gone through several blades. 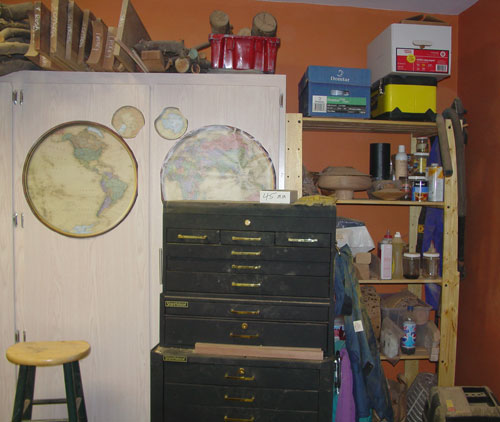 This storage area and my tool chest area to my right as I face my lathe. The cabinet is full of wood. The shelves hold mostly half-finished pieces and finishes and solvents. 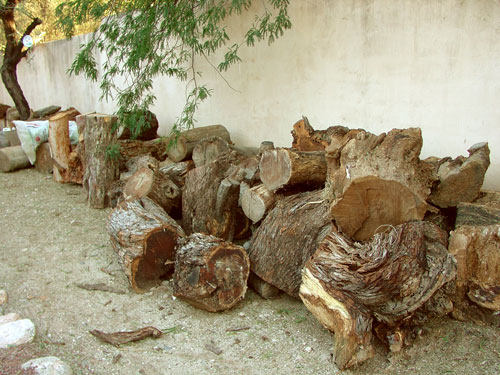 Pat and I share larger logs we’ve harvested together: a lot of mesquite, but also some African sumac and pepper tree. 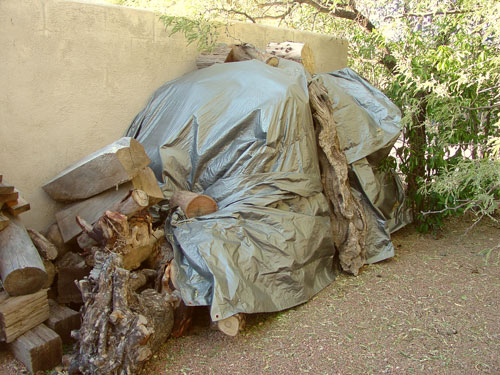 Under the tarp is yet more of the wood I’ve harvested from locally felled trees, mostly mesquite.