It was a fairly quiet day at the shop after our big day yesterday.

Jean-François turned another oak bowl with some interesting coloring: a base of red dye augmented with acrylic and other elements, and black over that with vinegar, then wax. 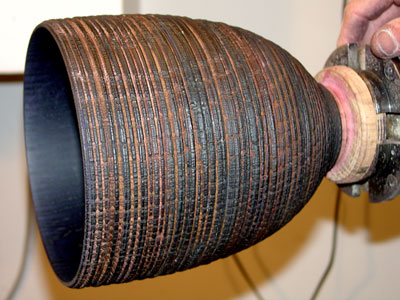 He also started turning bowls of ailanthus that he will use to cast a cement bowl. I can’t wait to see how this goes.

Sean continued work on his Cryptomeria bowl. After painting and dying the textured exterior, he further hollowed and carved the interior, then sanded it. 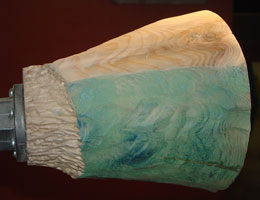 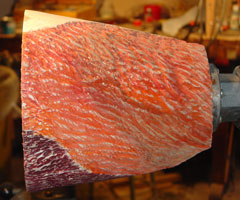 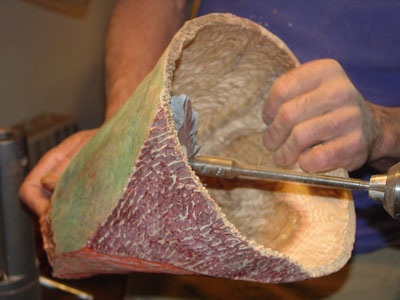 Siegfried worked on a large project on which he would like all of us to collaborate, involving turned wave forms combined into a larger wave. Here, he plays with some of the forms before planning his next move. 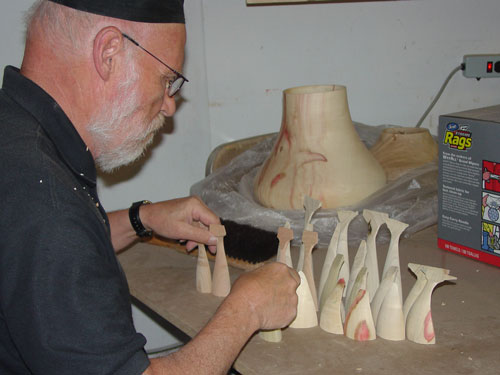 He later consulted with Peter about the project. 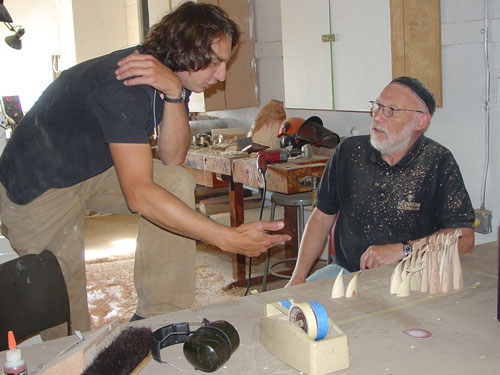 Peter went about making a frame for a wall piece using some of his used concrete forms. In the course of using the table saw, he found the shop’s push stick inadequate, so he made his own in the style of his alma mater, RIT (Rochester Institute of Technology). 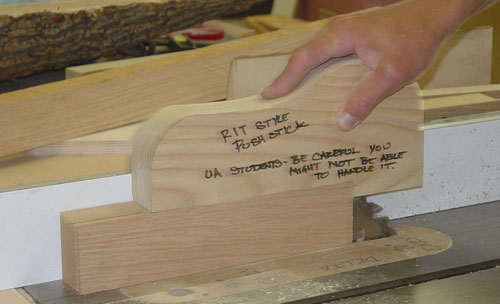 I got off to a slow start, because I was sore from hauling logs. I warmed up by helping Jane inventory lumber, then finished the pear bowl I started yesterday. I hadn’t intended to leave the bark on, but it didn’t come off during turning as I expected, and I like it, so for now it stays. I’ll see what happens as the bowl dries before doing the carving I had planned. (I also included the pith near the foot and am waiting to see if it cracks open during drying.) 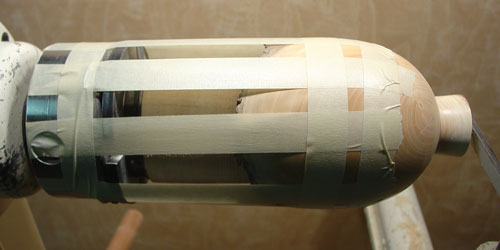 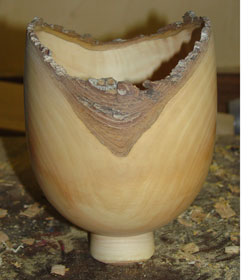 The photo above illustrates the magic of masking tape. I have the bowl reversed on a domed block with a foam pad in between. I used the tailstock to position the bowl and kept it in place to turn as much of the foot as possible. But to remove the interior of the foot, I had to move the tailstock. The masking tape miraculously holds if you tape the piece well and make only light cuts. If you try this at home, be prepared to react quickly if anything starts to move. And don’t blame me if you choose to take the risk and you get a catch.