A play day! Gus, Jane, Jean-François, Siegfried, and I took Peter to the wood dump, and we loaded up again. I confess I went overboard, but, hey, someone will use the wood, right? 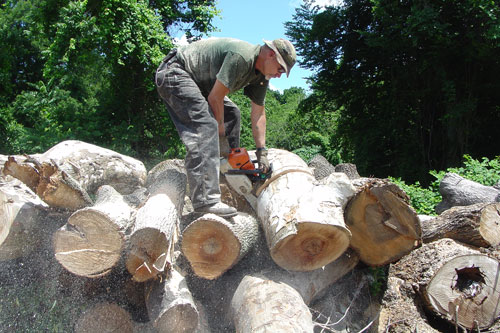 Peter proved himself pretty adept with a chainsaw himself. Here, he is cutting a large cherry log for a bench he wants to make while he’s here. He also taught Jane and me how to use the chainsaw safely. 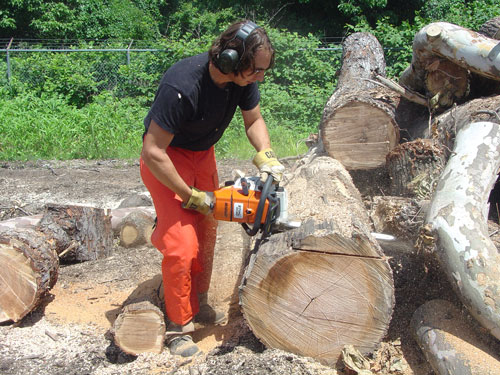 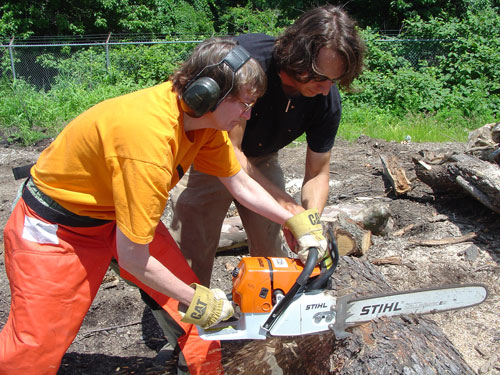 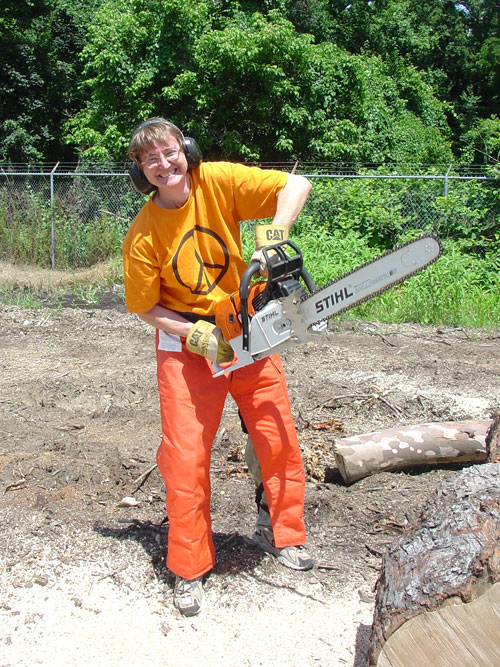 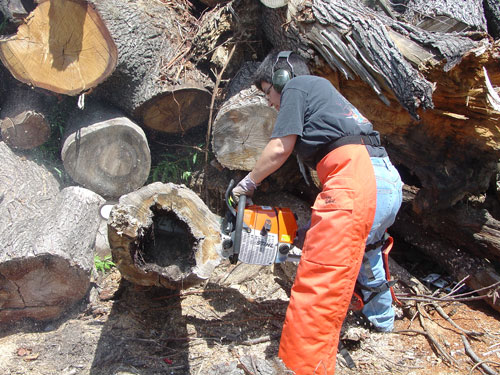 We cut so much we had to stop to sharpen. Gus showed us all how to sharpen the chain properly with a round file. 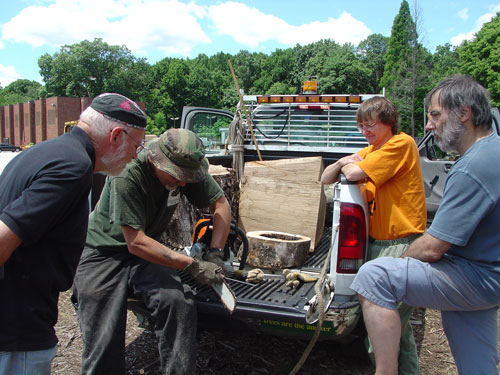 Peter, our resident furniture maker, cut a cube from a log segment and stacked the remainder of the log on the cube. Voilà! His first ITE chair. It won’t make the exhibition, however, since it came apart when he tossed what was left of the log on the pile. 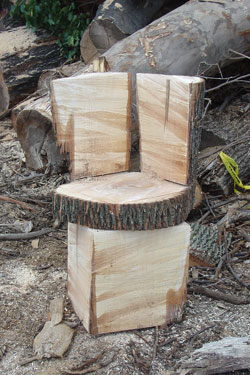 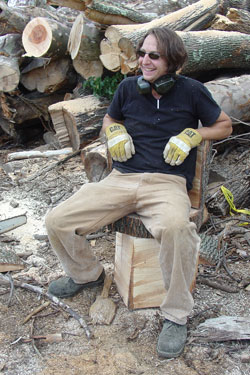 Communicating across languages is no problem for Jean-François and Jane. In fact, the English language skills of both Jean-François and Siegfried have improved significantly since the beginning. Meanwhile, none of the rest of us has improved in the least our French or German. Peter has been trying out his high school (or was it junior high?) French. Jean-François laughs. 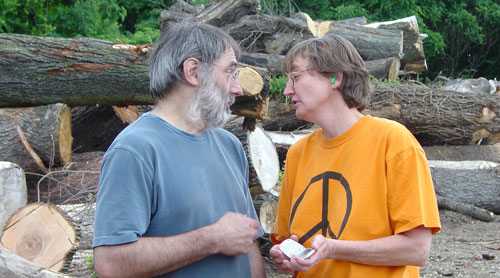 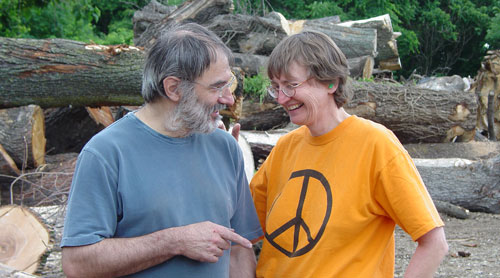 Back at the shop, Peter, Jean-François, and I experimented with quick-setting cement that Peter brought with him. The possibilities are interesting. 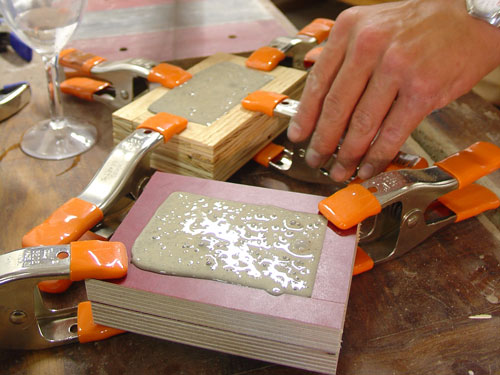 Peter couldn’t wait for the cement to dry before taking apart the form. Jean-François thought perhaps he should wait. 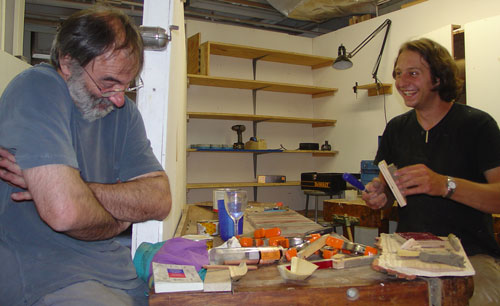 Jean-François (whom Peter had earlier accused of stealing his pencil) awarded Peter a pencil for a good demonstration of his use of cement, then took it back when Peter’s first sample came apart because Peter had removed it from the form before it had set. Peter later earned the pencil back with a successful second sample. Now, he has two pencils: his own and the one from Jean-François. 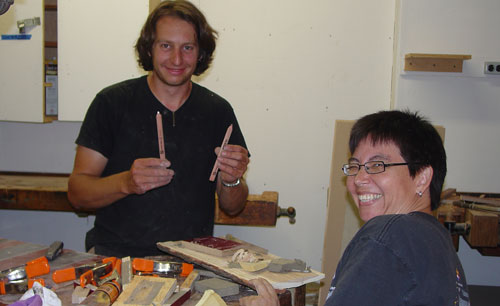 Peter roughed out the shape for his bench in the shop with an electric chainsaw. The log is finally light enough for him to be able to stand it up by himself. 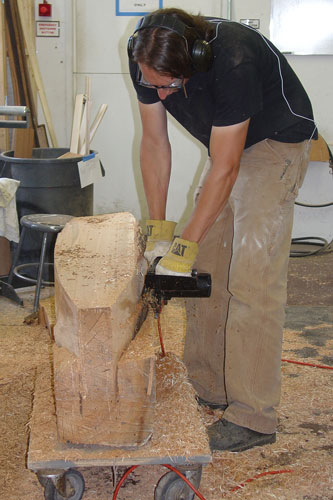 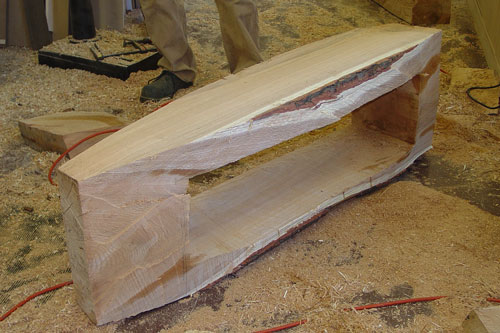 Now he is using a power planer to further shape the wood. 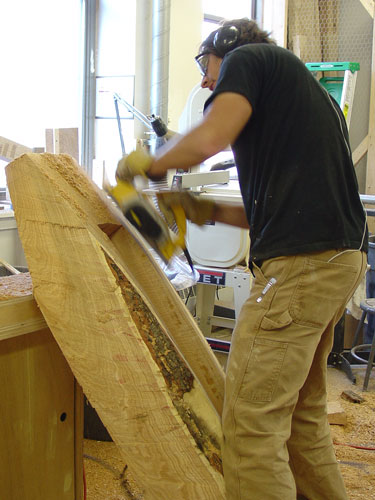 Turning actually went on in the shop today too. Sean has turned a bowl of Cryptomeria on three or four centers and is texturing each face differently. 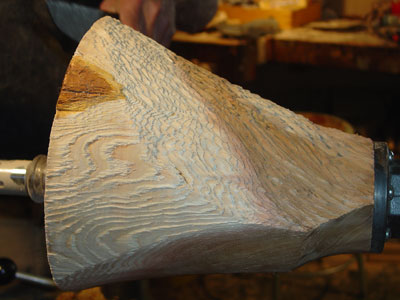 I started a new pear bowl, and Jean-François turned another oak bowl.

Yesterday evening, Broad Street (a.k.a. Avenue of the Arts) closed just a few blocks up from us for a small jazz festival with Branford Marsalis, part of Philadelphia’s celebration of the Fourth of July. I strolled up and swayed to the music for a bit, but was so exhausted from hauling logs that I couldn’t stay. Home to blog for me!