I forgot to include my favorite photo from yesterday. Jane, the shop supervisor, is our official problem solver, without whom we couldn’t spend nearly as much time working. In the course of solving our problems, she has to spend a lot of time on the phone: ordering supplies and equipment, securing a phone for us in the shop, finding a place to buy a used bike—you pose the problem, she’ll figure it out. 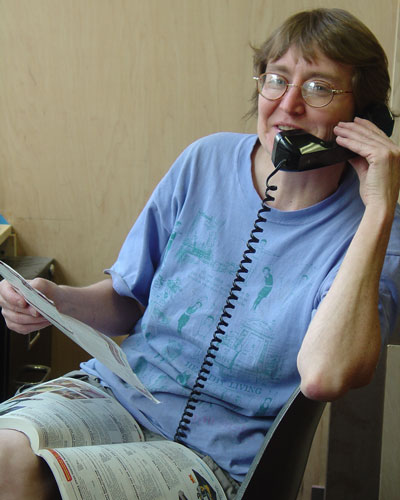 And can I add how grateful I am to have another woman around?

Jean-François continues on with his oak bowls. He has decided that what was to be the third bowl in his latest series is too different from the first two, so he’ll keep the pair together, but make two more to go with the third bowl. (Note: Despite how they appear in these photos, the third bowl is slightly smaller—and thinner-walled—than the first two.) 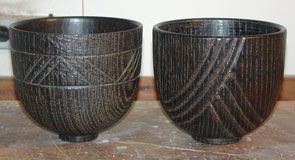 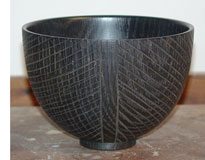 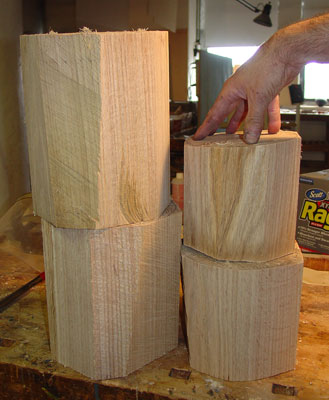 Sean has installed the legs on his walnut bowl and is finishing them up. This is the underside of the piece, but you can see bleaching that seeped through from his bleaching of the bowl itself. 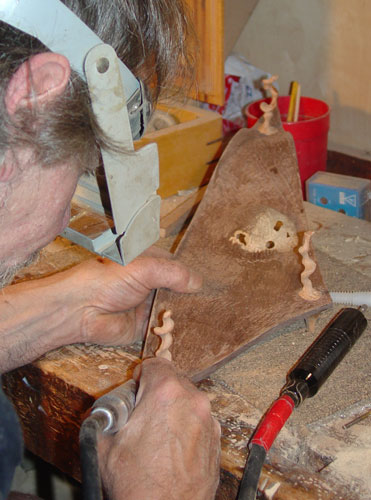 This is another scrap Sean pulled from the pile to turn. I suppose it can be considered another collaboration with me, since I cut the arc you see in order to remove a piece to use as a jam chuck. 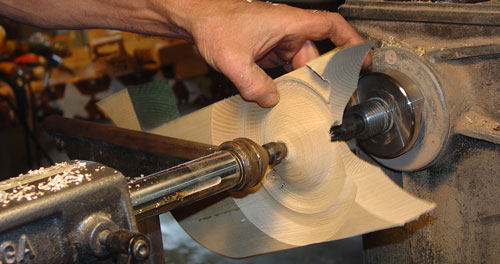 I had fun working on my cherry bowl today. I recut the surface along two of the axes before I liked what I had, then I carved a little on the top using spherical cutters in the Foredom. The top surface and the bowl are smooth; the exterior is covered with gouge marks—which were surprisingly hard to create consistently. A sharp gouge just wants to cut cleanly. I had to be sure to stay off of the bevel to leave cut marks. I’m not sure how I feel about this bowl. It’s completely unlike anything I have ever made before (which is one of the opportunities of the ITE, after all), and at one point I had titled it “Ugly on Four Axes.” It has grown on me, however, and I think I may like it. These pictures don’t do it justice. 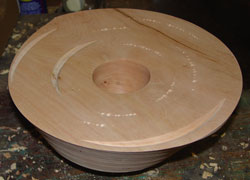 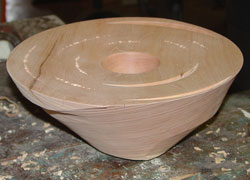 Siegfried wasn’t in the shop a lot today. I’m concerned about his continuing lack of energy. His heart rate isn’t back to normal either. What would you do in a foreign country with a condition that is no longer considered “emergent” but isn’t nearly “cured”? Could you afford to do anything about it? Can he afford not to?