This morning, Sean laid out and drilled a series of holes in his “running man” sculpture using Forstner bits on the drill press. 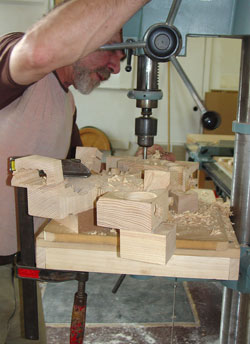 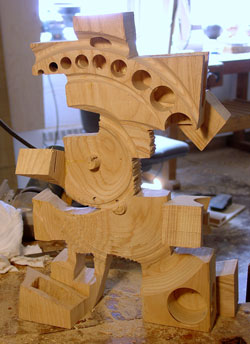 Later, Sean did more carving on the triangular walnut bowl. In addition to texturing the surface more, he has carved out recesses for the legs around the holes in two of the corners. You can see two legs lying behind the bowl, one highly carved, one not—at least, not yet.

He also worked on his fourth oak bowl, carving the exterior and then adding silver or blue-gray paint. 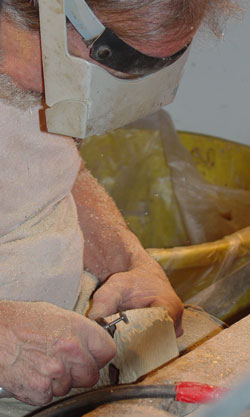 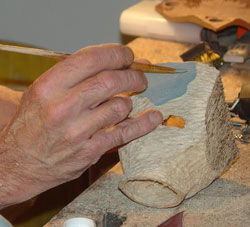 Below is proof that Jean-François does sand, despite all the carving and texturing he does.

He has nearly finished (except for the foot) the first of this series of colored and carved oak bowls. In the lower photos, he is working on the second of this series. Again, he is using the Arbortech reciprocating carver to cut the grooves, which he then will touch up with a Foredom.

In contrast to the first bowl, Jean-François has used white acrylic paint to fill the grooves and open grain of the second bowl. I believe he has not finished rubbing out the interior in the final photo. 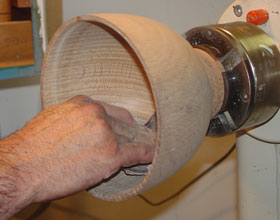 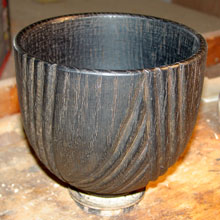 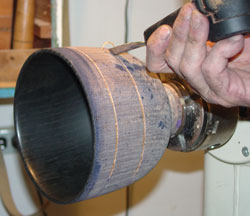 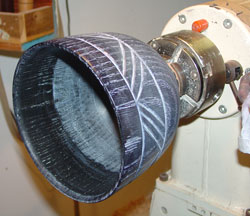 Siegfried was back in the shop today, but working at half speed. He continued working on inside-out-turned shapes, experimenting with an unorthodox means of shaping the pieces, on a belt sander. He is hoping that a good meal and some sleep will further restore his energy for tomorrow. 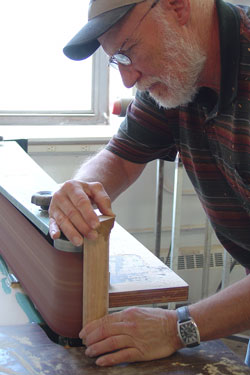 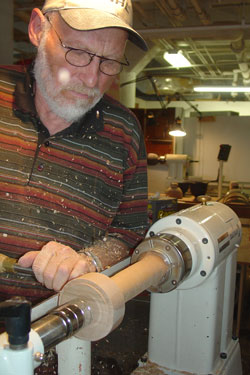 I got to turn a lot today. I finished the turning of my pear vessel, pictured below. It has a round bottom that cups nicely in the palm. I have begun carving the mouth, as you can see, a departure from my previous work. I will finish the carving after I pick up some new Dremel bits tomorrow. 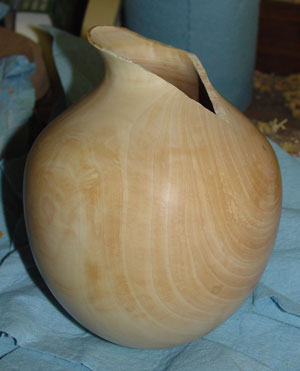 I also started a multiaxis cherry bowl, using four different centers on the bottom and keeping the same center on the top. I’m just playing really. My first go at it was unimpressive, but I went back and changed the curve and I’m beginning to like what’s emerging. I’ll work with it more tomorrow.