Jean-François was hard at work most of the day on his first ailanthus vessel (he plans three). He tried different wire brushes for texture and ended up using a very aggressive brush he brought with him from France. He used an Arbortech blade to make the rim irregular, then proceeded to work on thinning the wall. 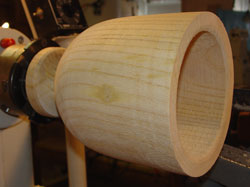 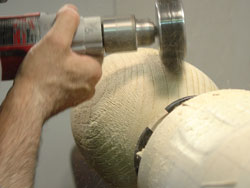 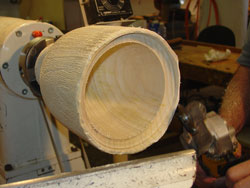 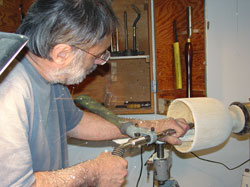 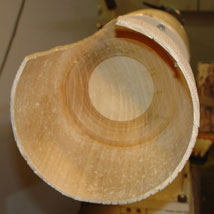 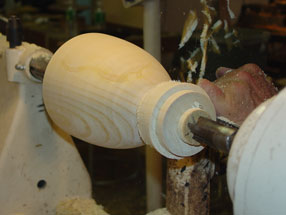 “Ooops” is apparently an international word. But no worries. After repairing the break with help from Sean, Jean-François pressed on with bowl number two.

Sean likes to have several projects going at once. He set aside the burl vessel to start a piece of burr oak. From the chunk of wood you see on the lathe, he turned a ring and a disc. He later cut the ring apart. He’ll carve the pieces and later put the pieces together in a sculpture. 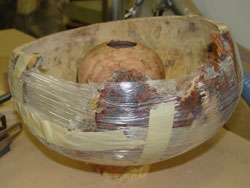 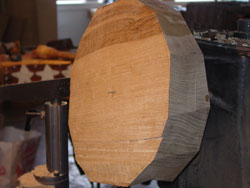 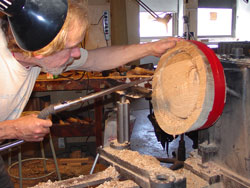 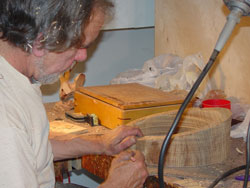 Siegfried expanded his horizons by beginning to carve a bowl he turned from a piece of dry horse chestnut that he brought with him from Germany. He also continued work on the silver maple vessel. He has the exterior established and is working now on hollowing it—before it gets too out of round from drying, he hopes. 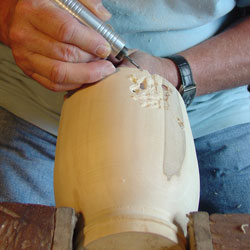 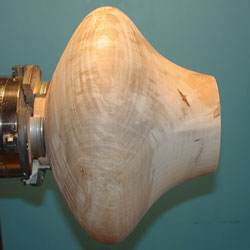 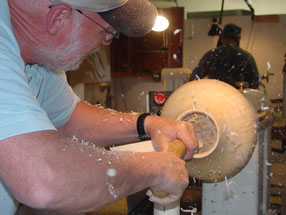 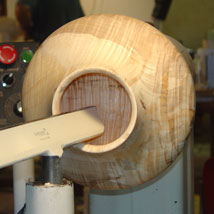 I hadn’t intended to turn today, but when I went to the shop I got pulled in. I started a second mulberry vessel from a large, checked quarter of a trunk. I love working the wood. It’s very yellow now, but the color will deepen to a dark russet. I know exactly what I want to do with the cracks in this piece. Once I established the basic outer shape, I glued it to a waste block mounted on a faceplate. Then I had to leave, because I had to let the glue dry.

These are some of the pieces I’ve started since arriving. The dark bowl is walnut, my Siegfried bowl. The second, lighter one is a round-bottom bowl of wet pear. I wirebrushed the exterior, but the texture is subtle. I plan to do some carving with the Foredom to add more texture. You can see the movement of the wood as it has dried. And the last, still mounted on the lathe is the second mulberry bowl. 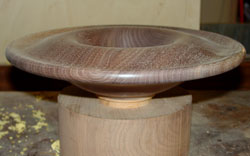 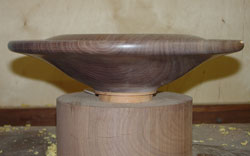 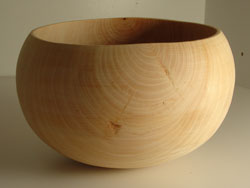 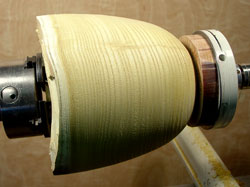